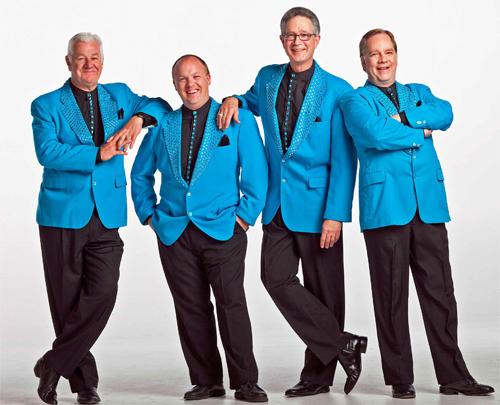 In 1957 THE DIAMONDS released an instant million selling hit called Little Darlin’. The song continues to sell worldwide and has been dubbed “the National Anthem of Rock and Roll”. To date it has sold approximately 20 million copies. The many honors and accolades include:

Through the years since the release of Little Darlin’ THE DIAMONDS have learned one important lesson—the durability of this classic rock and roll music is as much about the future as it is about the past. As a result, THE DIAMONDS continue to expand their audience to this day, performing in a variety of venues and settings worldwide. These performances include—with Symphony Orchestras, in Performing Arts Theatres and major concert halls, on cruise ships, in casinos, at county and state fairs, on tours of England, Ireland, Brazil, Chile, Korea, and Japan, for benefit concerts, corporate conventions and at nightclubs. “We’ve been pleased to find a growing audience among all age groups. They love songs they can understand, remember and actually sing the words to—today, tomorrow, or even 20 years from now.”

SEAN SOOTER – A major reason for THE DIAMONDS’ longevity as performers and entertainers lies in the diverse backgrounds of the individual members of the group. A very recent addition to the group is tenor Sean Sooter. Sean received his early performance training with the highly acclaimed national touring group, The Young Americans – performing in eight U.S. tours and as well as Japan. Sean went on to work as a featured vocalist aboard the MS Noordam with Holland America Cruise Lines. Some of his favorite production credits include various productions of Forever Plaid in Los Angeles and Orange County, CA, as well as performing with the Dapper Dans of Disneyland. Sean has served as musical director for numerous musical productions including Five Guys Named Moe, Little Shop of Horrors and Xanadu. He earned his BA in Music Education from California Baptist University and a Master of Arts degree in Education through Azusa Pacific University. Sean worked for six years as a high school music teacher before joining the Diamonds – following his dream of singing with “one of the best vocal groups in show business today.” Sean’s wide array of talents has made his addition to THE DIAMONDS’ lineup a real plus—for both the group and their loyal fans!

JERRY SIGGINS – Lead singer Jerry Siggins has accumulated some impressive credits of his own. Jerry has worked throughout the United States, Japan, and Australia as a singer and actor. He spent five summers at Jackson Hole’s Pink Garter Theater and has guest starred on The Tonight Show, Tony Orlando and Dawn, and The Love Boat. Before setting down roots as a permanent member of THE DIAMONDS in 1991, Jerry enjoyed a successful career as an actor in television commercials and was actively involved in Southern California theatre. He sang in a doo-wop group called Danny and The Dappers and was a mainstay at Disneyland and Disney World as a vocalist with The Dapper Dans vocal quartet for years.

JEFF DOLAN – The newest addition to THE DIAMONDS is bass singer Jeff Dolan. Jeff has worn many musical hats in his career — first as a member of the sensational vocal jazz group Beachfront Property, then as the bass singer and vocal contractor for Ray Conniff, touring internationally for ten years. Jeff was a member of the Dapper Dans of Disneyland, worked as a Christmas caroler for 25 years and has appeared on over 25 CDs. He has numerous recording credits including a Grammy award and singing with the Phoenix Chorale. He has graced the musical theatre stage in both Phoenix and Southern California, and served as the artistic director of the Tucson Barbershop eXperience Chorus. But for sure, Jeff’s greatest accomplishments are his kids — Danny, Bonnie, Hayley and Claire!.

GARY OWENS – Baritone singer Gary Owens has spent the longest time as a Diamond joining forces with bass singer John Felton in 1973. A well-rounded musician, Owens learned his craft as a journeyman bass player around Los Angeles while earning his undergraduate degree in music at California State University, Long Beach. In the early 1980’s, Owens took a brief hiatus from THE DIAMONDS to complete his Master’s Degree in Business Administration at the University of Southern California. Besides singing, and playing saxophone and flute, Owens does much of the vocal arranging for THE DIAMONDS. In that capacity, he is well aware of the group’s particular effectiveness. “Our goal has always been to keep that classic Diamonds’ sound intact. Although THE DIAMONDS are four distinctive individuals,” he notes, “we have created one strong group personality. The four of us as a unit have a special chemistry, and it is that chemistry that gives us our unique identity.”

The standing ovations and return engagements are the proof; THE DIAMONDS have taken the Classic Rock and Roll genre to a whole new level. THE DIAMONDS truly are – a cut above!

CLASSIC ROCK AND ROLL WITH TODAY’S ATTITUDE – THE DIAMONDS!