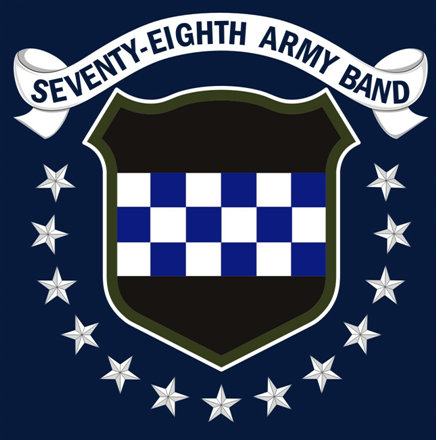 The 78th Army Band is one of the premier musical ambassadors for the 99th Regional Support Command (RSC), United States Army Reserve. Commander of the 99th RSC is Major General Troy D. Kok and the Command Sergeant Major is Arlindo Almeida.

The 78th Army Band consists of over 30 talented musicians from Virginia, Maryland, Delaware, New Jersey, New York and Pennsylvania. Band members are called upon as Army Reservists to provide entertainment for civic and military ceremonies; parades and concerts; and perform a variety of music including classical, concert, marches/patriotic, pop and jazz. The mission of the band is to furnish music whenever and wherever assigned while serving our nation and our community.

The 78th Army Band performs at numerous events, including military ceremonies, public community concerts, public parades, and school performances. In 2008, the band was the vanguard band in celebrating the Army Reserve’s 100th Anniversary, leading the 2008 national Memorial Day parade in Washington DC. The 78th most recently played for President Barrack Obama during his visit to Joint Base McGuire-Dix-Lakehurst in 2014.

The 78th Army Band consists of different performing Groups, which include Concert Band, Stage (Jazz) Band, Marching/Ceremonial Band, Brass Quintet, Jazz Combo, Checkmate (Rock Band), Dixie Band, and Buglers. The majority of our skilled musicians are versatile on more then one instrument, which enables the band to perform for various types of military and civic functions. The band drills one weekend per month and has 14 days of active duty per year.

The 78th Army Band is under the command of CW3 Luis Santiago and acting First Sergeant Ted Traini.