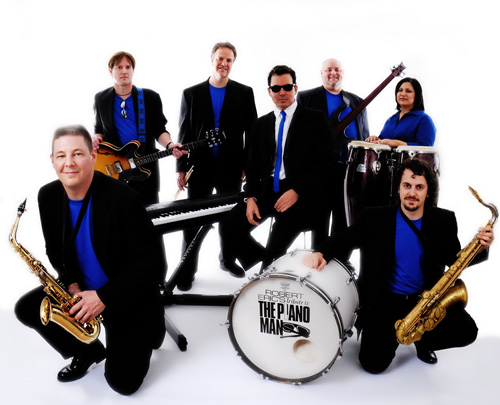 Robert Eric began his Piano Man tribute with the group “Big Shot” in 2003 playing in the Long Island Area. Toured with as Billy Joel in “Rocksplosion” 2004-2005 playing throughout the New York/Metropolitan Area. Known as “Philly’s Piano Man”, he performs regularly at Ceasars, Harrahs, Trump Marina, Hylton, and the entire Jersey Coast. Now touring exclusively through Frank Kielb Entertainment, he opened at the Wachovia Center twice for Billy Joel, with Billy asking for and receiving a big round of applause from the crowd in honor the warm-up tribute act. Currently, Frank has the band and Robert keeping a busy schedule of clubs, events, festivals and universities. Licensed by Billy Joel and JoelSongs to record a dance remix album of Piano Man classics. The album: ClubBillyJoel available at CDBaby.com. Speaking of dance remixes, Robert has produced and engineered over 1,000 records. 50 Billboard charting. 3 Gold Records!! Re-mix clients include: Billy Joel, Gloria Estephan, Pretty Poison, Rockell, Collage, Expose, Amber, and many more. Check Out MySpace/RobertEric. The guy just looks, sounds, talks, acts and plays like him. (Maybe in a younger man’s clothes.)