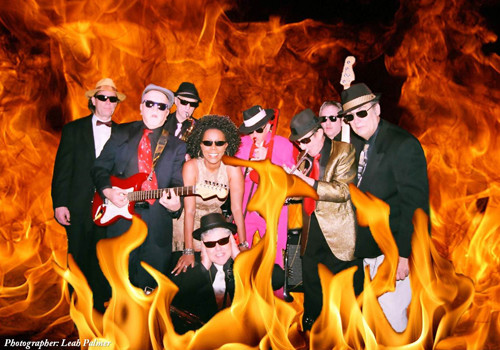 Philadelphia based Jive Jump & Wail was formed in June of 2012 and is a 9 piece high energy band playing the best of House Rockin’ music, a unique combination of swing, retro-swing, jump blues, New Orleans brass band sounds, classic r & b, roots r & r, & more! The band features the sizzling Demetria Joyce Bailey on vocals, & the red hot Molten Brass horns. Our musicians have performed with Grover Washington Jr, Bobby Rydell, Sister Sledge, Cab Calloway, George Benson, Branford Marsalis, Gene Krupa, Eddie Holman, Todd Glass, Shirley Scott, Charlie Prose, Danny & the Juniors, Al Alberts, Robin Eubanks, Julius La Rosa, Vaughn Monroe, Billy Cobham, Mitch Miller, the Philadelphia Eagles “Sound of Brass”, & many others. The band has performed at First Energy Stadium, the Sands Casino, the Parx Casino, for the PRSSA National Convention, at the legendary Ortleib’s Lounge in Philadelphia, & others. The band has an exciting stage show & loves to interact with the audience. Jive Jump & Wail is in the process of recording it’s first studio CD, which should be out by the end of the year.