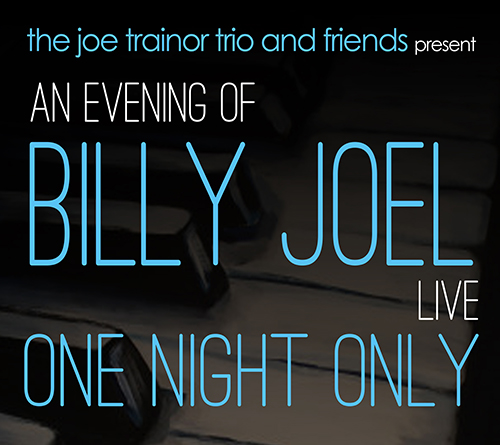 The music of one of rock’s most legendary songwriters comes to The Rehoboth Bandstand on Saturday, August 26, 2017, as Wilmington-based musician, Joe Trainor and his band roll into town to present an evening of the music of Billy Joel.

As lead singer and pianist for The Joe Trainor Trio, Joe has been a fixture on the regional original music scene for over a decade and is paying tribute to one of his idols along with an 8-piece band.  The group includes Trainor (vocals, piano), Jill Knapp, of Hot Breakfast! (vocals, sax, percussion), Matt Casarino, also of Hot Breakfast! (vocals, sax, guitar), Kerry Kristine McElrone (vocals, percussion), Steve Manocchio (guitar, harmonica), Chuck Kuzminski (guitar), Allen Trainor (bass) and Jeff Dement (drums) and will be performing off-the-record renditions of songs from Joel’s 12 albums.

The show will consist of selections from Joel’s entire career, from 1970’s Cold Spring Harbor to 1993’s River of Dreams, including hits like ‘My Life’, ‘You May Be Right’ and ‘Say Goodbye To Hollywood’ as well as fan favorites like ‘Scenes From An Italian Restaurant’ and ‘Prelude/Angry Young Man’.  The 20+ song set list spotlights Joel’s vast and influential catalog.

The group is not new to the tribute world, having produced tributes in the past, including a full staging of Pink Floyd’s The Wall and well received performances of The Beatles’ Abbey Road.  Outside of the group, Trainor is the lead singer for the tribute band In The Light, whose recent shows include tributes to Pink Floyd, Led Zeppelin, The Who and Queen.

Of the Piano Man, Joe says, “I’ve been playing Billy’s music my whole life, and to be able to present that music live on stage is a dream come true.  And to do it with this band is an honor.  We’ve done this show a few times in the past.  Mainly because it’s an incredibly fun experience.  For us and the audience.”