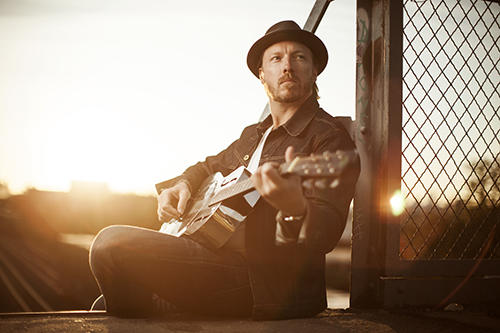 Jamie McLean had a big decision to make in 2006. He could continue to tour the globe as the guitarist for New Orleans’ famed Dirty Dozen Brass Band playing sets at Madison Square Garden, Bonnaroo, Japan’s Fuji Rock and working with the likes of Elvis Costello, Dave Matthews and Norah Jones. Or he could do it his way, take the road less traveled and begin to lead Jamie McLean Band. It seemed as though there was only one option.

“It was certainly a tough choice to leave my bread and butter gig but I could feel it in my heart that I needed to be singing and recording and performing my own music. I’ve never been happier!”

McLean has never looked back and he’s been relentlessly touring and recording with Jamie McLean Band. Jamie McLean Band, which also features Brian Griffin on drums and Ben Mars on bass has released 5 albums Sunday Morning (2011), Time Of My Life (2011), Completely (2010), American Heartache (2008) and This Time Around (2006).

Jamie McLean Band recently released their first and long awaited live album. Recorded at the famed Gibson Showroom in New York City Live At Gibson captures the band in its element. Live and in front of a captivated crowd is where Jamie McLean Band truly shines and this night was no different. The band dug deep into their catalog to produce a set list and album that features their original brand of blues, rock and soul. Special guests like American Idol winner Taylor Hicks and Robert Randolph keys man Jason Crosby add some great flavor to the set. Bluesy staples like “Crazy About You” and “Country Living” get turned up even more in front of a crowd and JMB does more than justice to covers like Allman Brothers’ “Midnight Rider” and Otis Redding’s “Mr. Pitiful.”

Jamie McLean Band will tour behind their new album throughout the US and Canada this year! Don’t miss their amazing live set when they roll into a town near you!

“McLean and company ooze drops of southern roots rock, blues, R&B, funk and soul out of every note… the rock & roll swagger of the Rolling Stones combined with the songwriting prowess of Ryan Adams.” – Jambase

“A honkin’ collection of Southern-style blues rock, Americana, and soul…. as bawdy as anything the Black Crowes tried to snag from The Faces or The Stones circa ‘Sticky Fingers’ and ‘Exile on Main Street’ and as groovy and gutsy as Bowie’s ‘Young Americans.'” – Charleston City Paper