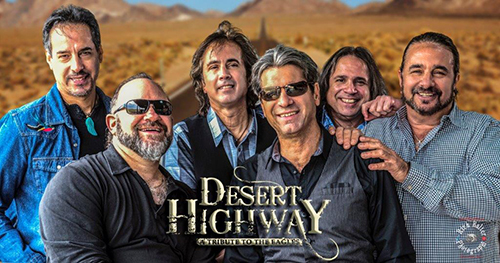 Desert Highway is a passionate group of six talented professionals, who are studio and concert tour veterans with major recording artists. The band performs live the rich vocal harmonies and intricate guitar styles, without the aid of added pre-recorded tracks. The band is available as a six or nine piece group, with the addition of a full horn section for selected performances.

The Eagles are arguably the quintessential American band. They combine influences of both rock and country music into a unique sound that provided the soundtrack to a generation. Since the 1970’s, they have sold more than 120 million albums, earning five U.S. number one singles and six Grammy awards.

From the country inspired, ‘Take It Easy’, to the soaring guitar rock anthem, ‘Hotel California’. The list goes on and on, with hits such as ‘Life In The Fast Lane’, ‘Peaceful Easy Feeling’, ‘Heartache Tonight’ and ‘Desperado’.

Desert Highway channels the music of this legendary band, and continues to win over both long time and new found fans of all generations.